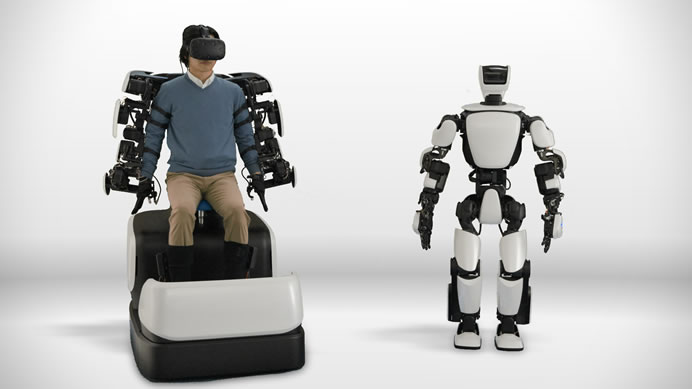 Toyota today revealed its third generation humanoid robot – T-HR3. Toyota’s latest robotics platform is designed and developed by Toyota’s Partner Robot Division. T-HR3 represents an evolution from previous generation instrument-playing humanoid robots, which were created to test the precise positioning of joints and pre-programmed movements, to a platform with capabilities that can safely assist humans in a variety of settings, such as the home, medical facilities, construction sites, disaster-stricken areas and even outer space. 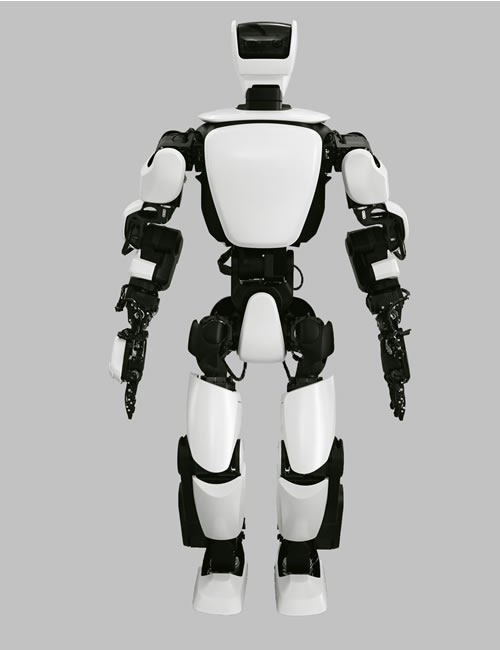 Toyota’s third generation humanoid robot T-HR3 is controlled from a Master Maneuvering System that allows the entire body of the robot to be operated instinctively with wearable controls that map hand, arm and foot movements to the robot, and a head-mounted display that allows the user to see from the robot’s perspective. The system’s master arms give the operator full range of motion of the robot’s corresponding joints and the master foot allows the operator to walk in place in the chair to move the robot forward or laterally. The Self-interference Prevention Technology embedded in T-HR3 operates automatically to ensure the robot and user do not disrupt each other’s movements.

Onboard T-HR3 and the Master Maneuvering System, motors, reduction gears and torque sensors (collectively called Torque Servo Modules) are connected to each joint. These modules communicate the operator’s movements directly to T-HR3’s 29 body parts and the Master Maneuvering System’s 16 master control systems for a smooth, synchronized user experience. The Torque Servo Module has been developed in collaboration with Tamagawa Seiki Co., Ltd. and NIDEC COPAL ELECTRONICS CORP. This technology advances Toyota’s research into safe robotics by measuring the force exerted by and on T-HR3 as it interacts with its environment and then conveying that information to the operator using force feedback.

The Torque Servo Module enables T-HR3’s core capabilities: Flexible Joint Control, to control the force of contact the robot makes with any individuals or objects in its surrounding environment; Whole-body Coordination and Balance Control, to maintain the robot’s balance if it collides with objects in its environment; and Real Remote Maneuvering, to give users seamless and intuitive control over the robot. These functions have broad implications for future robotics research and development, especially for robots that operate in environments where they must safely and precisely interact with their surroundings. T-HR3 will be featured at the upcoming International Robot Exhibition 2017 at Tokyo Big Sight from November 29 through December 2.