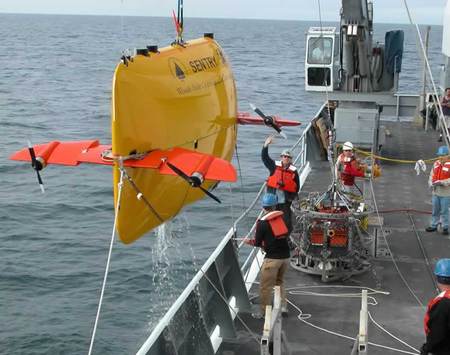 The newly-developed underwater robot Sentry capable of diving as deep as 5,000 meters (3.1 miles) into the ocean, has successfully completed its first scientific mission, the U.S. National Science Foundation reported on Wednesday. Sentry is a state-of-the-art, free-swimming underwater robot that can operate independently, without tethers or other connections to a research ship. Working in tandem with sonar instruments on the UW-operated research vessel Thomas G. Thompson and with photo-mapping by WHOI’s TowCam seafloor imaging system, Sentry gathered the most precise maps to date of seafloor features known as Hydrate Ridge and Axial Volcano off the coast of Oregon and Washington. The vehicle has thrusters built into its foils, or wings. Like an airplane, the foils allow the vehicle to gain lift or drag or directional momentum, as needed. The autonomous underwater vehicle, or AUV, is pre-programmed with guidance for deep-water surveying, but it can also make its own decisions about navigation on the terrain of the seafloor. 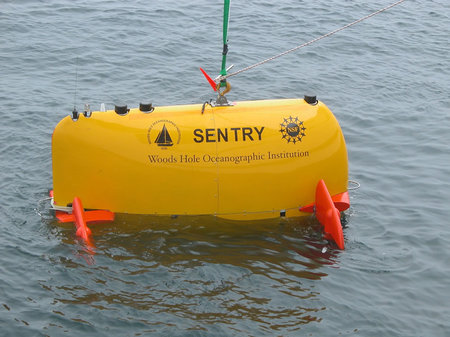 Sentry is designed to swim like a fish or fly like a helicopter through the water. The sleek hydrodynamic design allows the vehicle to descend quickly from the sea surface to the depths (about 3,500 meters per hour). The novel shape also gives the vehicle tremendous stability and balance while cruising through bottom currents. Powered by more than 1,000 lithium-ion batteries-similar to those used in laptop computers, though adapted for extreme pressures, Sentry dove for as long as 18 hours and 58 kilometers, with the potential for longer trips in the future.