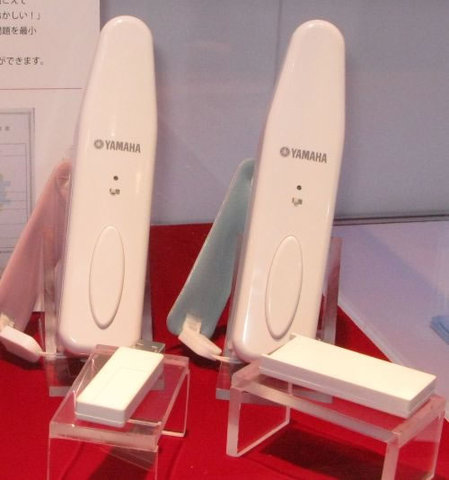 Yamaha showcased a stick-like device, “Muro Sensor,” that can be used to play music by sensing the direction and speed of acceleration. The Muro Sensor, in its about 15cm long chassis, is equipped with a triaxial acceleration sensor, a proprietary 2.4GHz wireless module developed by Nordic Semiconductor ASA of Norway and it looks like Nintendo’s “Wii Stick” (Wii Remote). Up to 24 units of the Muro Sensor to one base unit at the same time and its transmission delay is less than 3ms. When a user swings the Yamaha Muro Sensor, the values of the acceleration are wirelessly transmitted to the base unit of the wireless system and, then, to the user’s PC. If the PC is connected to a sound generator, preset sounds can be played based on those values.

Each unit of the Muro Sensor has its own ID and can generate different sounds. Because up to 24 units can be used at the same time, 12 people can play at the same time even if each of them holds two units. The Muro Sensor was displayed as a reference exhibit at Wireless Japan 2008. Yamaha plans to use the device in the company’s new project, “Music and Health,” for its music training classes.