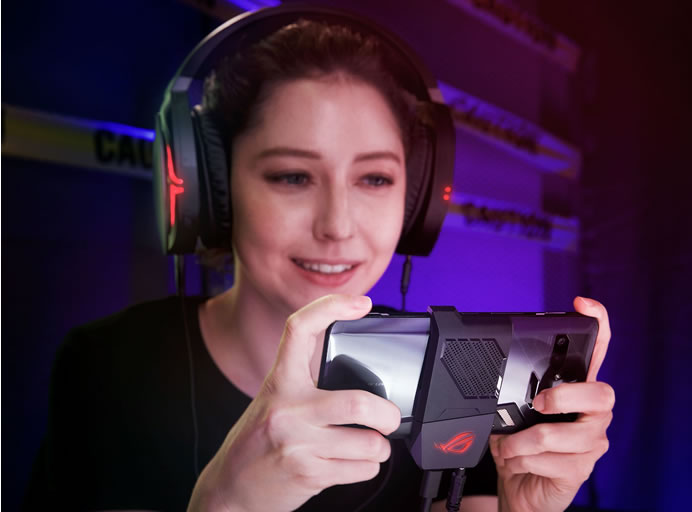 Asus Republic of Gamers first Android device –the ROG Phone is based on Qualcomm’s latest Snapdragon 845 SoC, whose eight Kryo CPU cores and Adreno 630 graphics have ample horsepower for the latest games. Exclusive to the ROG Phone, this special chip clocks up to 2.96GHz, nearly 200MHz higher than stock, making it Qualcomm’s fastest-ever mobile platform!The Snapdragon 845 aggressively reduces clock speeds during idle periods, and balances workloads between high-performance and power-efficient CPU cores make the ROG Phone to last all day. While these measures dramatically improve battery life, they can also introduce small delays that slow down your game.

To prevent interruption, Asus developed X Mode, which raises the minimum clock speed to keep the CPU on its toes, and confines tasks to the chip’s four fastest cores to ensure maximum performance. You can enable this mode instantly from the Quick Settings menu or configure Game Center to activate it automatically when running your favorite games and any other apps that need a boost.The new GameCool system improves thermals with a copper heat spreader and 3D vapor chamber efficiently transfer heat away from the SoC and into the body. For an extra kick, the optional AeroActive Cooler blows air over the back to accelerate heat dissipation into the environment. This auxiliary cooler comes in the box and lowers the phone’s surface and processor temperatures enough to improve sustained performance for extremely strenuous gaming sessions. 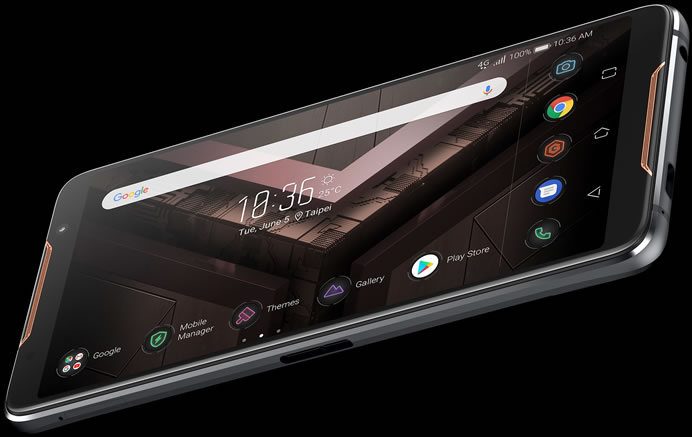 The pumped-up processor is perfect for power users who do everything on their mobile devices, especially when paired with 8GB of RAM and up to 512GB of speedy UFS 2.1 storage. The faster display adds a luxurious layer of polish to everyday activities like quickly scrolling through web sites and social feeds, and its 18:9 aspect ratio makes the body narrower and easier to hold. Gorilla Glass protects the screen from inadvertent damage, while a water-resistant design protects the body against liquid infiltration.

Dual front-facing speakers with smart amplifier (24-bit/192KHz Hi-Res Audio, DTS Headphone:X 7.1 virtual surround-sound and Qualcomm aptX High-definition Bluetooth wireless audio) produce more volume with less distortion for everything from Spotify playlists to battlefield gunfire. The integrated networking is top notch, with Gigabit LTE cellular, plus WiGig-certified 802.11ad 60GHz WiFi with both 2×2 MIMO and WiFi Direct. The side-mounted port also supports Gigabit Ethernet over Type-C, plus HDMI and USB. Both of the Type-C ports work with standard chargers for convenience and compatibility. The ROG Phone can charge its 4,000mAh battery to 60% capacity in only 33 minutes and get to 85% in just over an hour.

Fast charging is a given with high-end smartphones, as is the fingerprint reader for instant unlocking, and the dual rear cameras sitting next to it. The front cameras capture 12MP images with a conventional lens, while the secondary camera takes 8MP wide-angle shots with a 120° field of view. The ROG Phone measures 158.8 x 76.2 x 8.6mm, weighs 200g and is powered by a 4,000mAh battery.