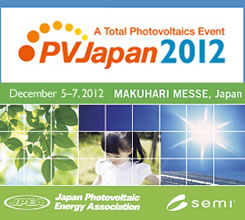 Since the start of a new Feed-in Tariff (FIT) program in July of this year, the domestic market in Japan for public- and industrial-use solar power has been expanding rapidly, with large-scale mega-solar projects being planned all around the country. Residential-use solar energy is also on the rise, and with more than one million homes in Japan now equipped with solar power generating systems, interest is growing for smart-house technology to combine and efficiently control energy use using solar power, battery storage units, and home energy management systems (HEMS).