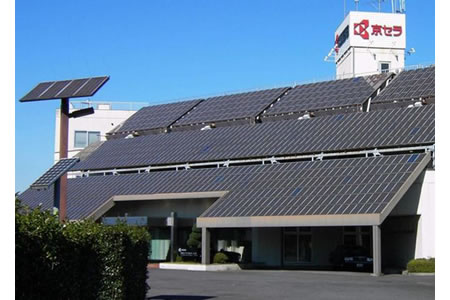 Kyocera announced today that its main 210-watt solar module (comprised of 54 multicrystalline silicon photovoltaic cells; mass-produced since 2008) is the first in the world to have passed the major sub-tests of the new Long-Term Sequential Test performed by TUV Rheinland Japan Ltd. which independently evaluates solar module quality and reliability. TUV Rheinland is a leading group for the provision of technical services worldwide. It has over 490 locations in 61 countries on all five continents. The Long-Term Sequential evaluates solar modules with four sub-tests: Damp Heat, Thermal Cycling, Humidity Freeze, and Bypass Diode.

These test the module’s overall performance and quality by putting it under harsher conditions than those standardized by the International Electrotechnical Commission (IEC). While conventional testing dictates that a separate individual module be used per sub-test, the Long-Term Sequential Test carries out all four sub-tests on the same module, thereby evaluating it under conditions closer to those a product faces over its actual lifetime.