Featuring the widest array of engine choices available in its class, the 2012 Honda Civic is designed to even better meet the diverse needs of the compact-vehicle buyer when it launches this spring. The entire redesigned ninth-generation Honda Civic lineup will become more fuel efficient with two models – the all-new Civic HF and the Civic Hybrid – each delivering fuel economy estimates of more than 40 mpg on the highway. The economical Honda Civic HF model will be the most fuel-efficient gasoline-only powered Civic in the lineup. Equipped with a 1.8-liter i-VTEC engine, the Civic HF is targeted to earn EPA-estimated fuel economy1 of 41 mpg on the highway. The 2012 Civic Hybrid, which will be outfitted for the first time with a lithium-ion battery and a larger 1.5-liter i-VTEC engine, is expected to achieve an EPA-estimated city/highway combined fuel economy1 of 45 mpg. 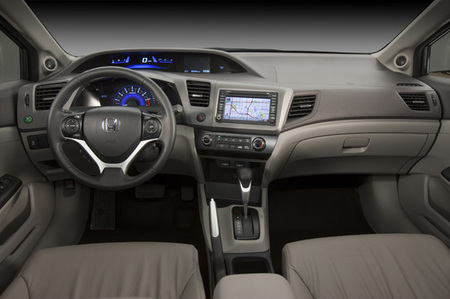 Both the Honda Civic HF and Civic Hybrid models will be equipped with aerodynamic components for improved efficiency and Honda ECO Assist technology, an innovation that can enhance efficient vehicle operation while providing feedback to promote more efficient individual driving styles. In addition to the Civic HF and Civic Hybrid models, the Civic Sedan, Civic Coupe and Civic GX Natural Gas models are also estimated to achieve improved fuel economy compared to the current models.