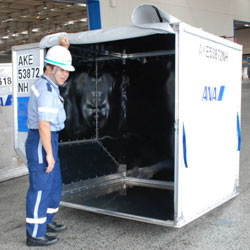 All Nippon Airways (ANA) has introduced lightweight, carbon fiber reinforced plastic cargo containers for the first time in the world, in a bid to reduce aircraft fuel consumption. The airline used carbon fiber reinforced plastic in the outer panels of cargo containers, successfully reducing their weight to around 70 kilograms — about 30 kilograms lighter than traditional ones made of aluminum — and improving their strength at the same time. Each container costs around 190,000 yen ($2215), about 50,000 yen ($583) more than aluminum ones.

ANA first introduced the new cargo containers mainly to its Narita-San Francisco route on July 29 and plans to replace all of its 1,900 containers for international flights in the future. When 44 containers are carried on a Boeing 777-300 aircraft, the containers are expected to allow the airline to cut some 1,272 kilograms of carbon dioxide and save about 516 liters of fuel on a one-way trip to San Francisco.