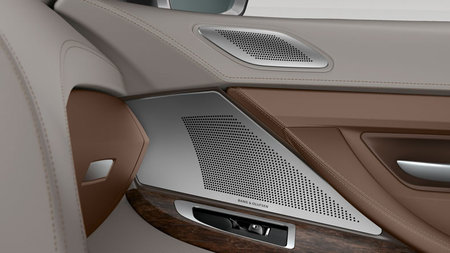 The first fruits of partnership between Bang & Olufsen and BMW will be on display at the Paris Motor Show, 30 September to 17 October, with the unveiling of the new Bang & Olufsen High-End Surround Sound System featured in the BMW 6 Series concept car. The Bang & Olufsen High-End Surround Sound System consists of 16 fully active loudspeakers delivering an outstanding sound performance. In the centre of the dashboard, the tweeter and mid-range drivers deliver the perfect sound stage, while the four pairs of tweeter and mid-range drivers by each seat, plus two additional pairs behind the rear seats, combine to create a highly balanced listening experience that will envelop you and your passengers in a crystal-clear sound stage. Finally, the two subwoofers under the front seats produce an even base performance throughout the whole cabin.

The layout of the 16 fully active loudspeakers, with a subwoofer positioned under each front seat, seven mid-range loudspeakers and seven tweeters, creates a highly balanced listening experience that will envelop the driver and passengers in a crystal-clear sound stage.