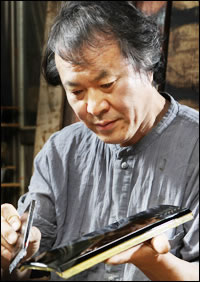 BMW cars are the most popular imported cars in Korea. Though BMW is German in every way ― robust, efficient, reliable as well as masculine in design and performance, BMW Korea decided to give a traditional Korean touch to its flagship BMW 7 Series sedan. The BMW 7 Series Korean Art Edition has an interior adorned with Najeon Chilgi, traditional lacquer ware inlaid with mother of pearl, handcrafted by master Shon Dae-hyeon who was designated as one of Seoul’s intangible cultural heritages.

The Najeon Chilgi fitted in the BMW 750i is handcrafted through an 11-step process that requires meticulous and arduous labor. Production begins with collecting the best mother of pearl from Myanmar. Master Shon said that there is a huge quality difference between those from Myanmar compared with the Philippines and Indonesia and those from Myanmar are three times as expensive. Shon visits dealers himself and chooses about three out of every 100 mother of pearls he is shown.

Cho Kyung-ho, president of design solution firm CMS, designed the Najeon Chilgi in a way that doesn’t disturb driving. The mother of pearl can reflect all the colors of the rainbow, but Cho tried to tone it down to optimize the ornamentation for the driver’s comfort. Once the artwork is glued to the frame it is coated 17 times with sap of the lacquer tree and polished. The lacquer is dried over three days in a highly humid place because moisture accelerates drying. Sap from the lacquer tree is so strong that lacquered parts of buried artifacts are well-preserved while the wooden ones decay. This means the inlay in the vehicle’s interior should last a long time.

BMW Group Korea sold 2,982 BMW vehicles in March. The BMW 7 Series Korean Art Edition was unveiled at the Seoul Motor Show 2011, at KINTEX in Goyang, Gyeonggi Province, to be displayed until April 10. Counting the sales of the flagship 7 Series alone, Korea is the world’s fourth largest market for the premium automaker.