The 25ft-long British Steam Car – nicknamed the fastest kettle in the world – reached an average speed of 139.843mph on two runs over a measured mile at the Edwards Air Force Base in California. Driver Charles Burnett beat the previous record of 127mph set by American Fred Marriott in a Stanley steam car at the Daytona Beach Road Course in 1906. Mr Burnett piloted the car for both runs, reaching a peak speed of 136mph on the first and 151mph on the second, a team spokesman said. 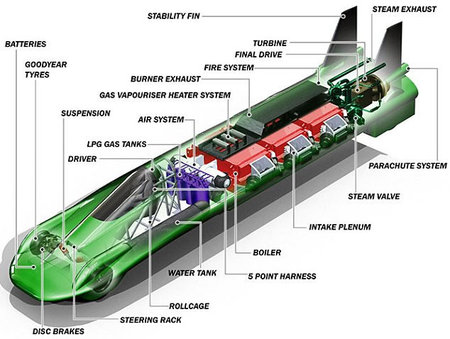 Weighing three tons, the British Steam Car is made from a mixture of lightweight carbon-fibre composite and aluminium wrapped around a steel space frame chassis. It burns Liquid Petroleum Gas (LPG) in 12 boilers containing nearly two miles of tubing. Demineralised water is pumped into the boilers at up to 50 litres a minute to cool the blistering burners, which produce three megawatts of heat. Steam is superheated to 400C and injected into the turbine at more than twice the speed of sound. The car is brought to a stop by large Goodyear tyres, brake discs and a parachute.