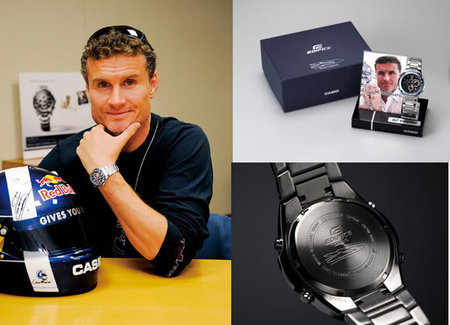 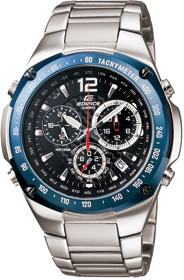 Casio announced today the release of a new model in its Edifice lineup of metallic watches for men. The EF-529DC is a David Coulthard signature model, honoring the British Formula 1 racing driver. David Coulthard, first driver for Red Bull Racing, is one of motor sport’s most experienced drivers. His brilliant career includes 13 Grand Prix wins to date. Casio recognized that Coulthard’s consistently superior speed and clever driving were a great match for the Edifice brand, and since April this year David has served as a Brand Ambassador for Edifice, helping Casio with a wide range of sales promotion activities. Casio’s Edifice brand metallic watches features a design theme of “Speed and Intelligence.” Edifice watches incorporate leading-edge technologies and functionality, and convey all the dynamism and sense of speed associated with motor sports.

The functionality and design of the newly introduced Casio EF-529DC signature model elegantly expresses David Coulthard’s worldview. The bezel features a blue reminiscent of David’s well-known helmet, which is designed after the flag of his native land, Scotland. With the ion plating finish applied to the bezel and the decorative screws surrounding it, the watch exudes a refined, urban feel. The watch face is actually made of carbon fiber, a material frequently used in race cars, for the ultimate expression of the motor sports theme. Overall, the watch communicates the image of a man’s world of worldwide competition, where rivals constantly strive for greater speed. In a fitting finishing touch, David Coulthard’s signature is engraved on the watch back and is also imprinted on the specially made packaging.