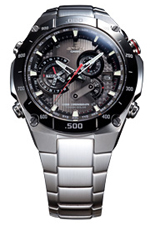 Casio has renewed its contract with the Red Bull Racing Formula One team to continue serving as a Red Bull Racing Team Partner for the 2011 season. Last year, Red Bull Racing won the Formula One World Championship, the pinnacle of auto racing. Along with supporting the Red Bull Racing team even more fervently than it did last year, Casio will make the most of this relationship to strengthen the brand image for its EDIFICE full-metal watches for men, which capture the essence of motor sports. Under the concept of “Speed and Intelligence,” the EDIFICE line of analog metal watches evokes a sense of velocity and motor sports energy with the movement of the hands and distinctive watchface.