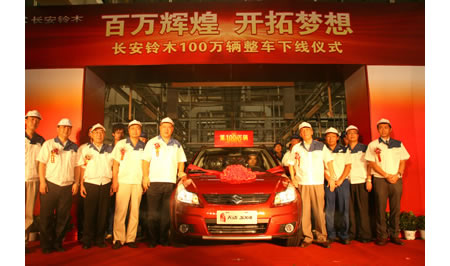 One of Suzuki Motor Corporation’s Chinese automobile production and marketing joint-venture companies, Chongqing Changan Suzuki Automobile Co reached its millionth unit of production at the end of June. The first model produced by Changan Suzuki was the Alto. Over the years, the Alto has come to account for about half of the company’s aggregate production volume and has played a big role in raising awareness of the Suzuki brand throughout China. Changan Suzuki also produces the distinctive Cultus, Swift, and SX4.

Since the start of production at Changan Suzuki in May 1995, the company has drawn on Suzuki’s expertise in producing vehicles in line with Suzuki’s basic policy ”Smaller, Fewer, Lighter, Shorter and Neater” in order to offer attractively priced, eco-friendly automobiles to Chinese customers.