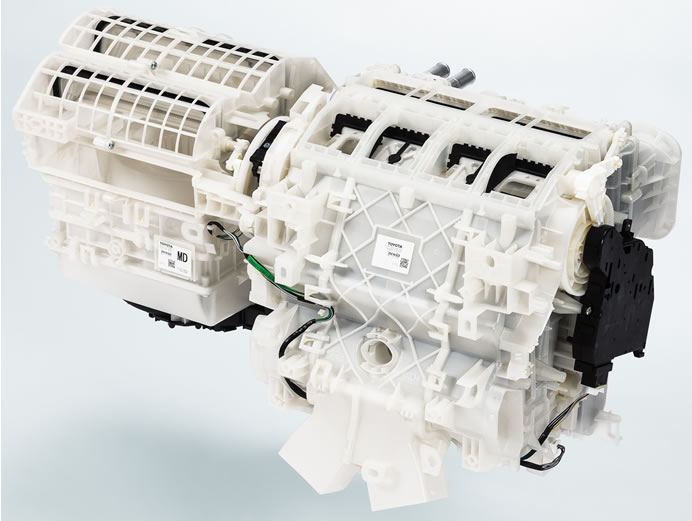 Denso today announced a new automotive climate control unit that can be used for a wide variety of vehicles ranging from compact to luxury cars. Conventional climate control units are often designed and tailored to each vehicle model, but this product has a new structure which enabled to standardize components while realizing required performance. This highly standardized automotive climate control unit, which is smaller and lighter while realizing higher performance, is the world’s first of its kind. The thickness of the air mix door is half that of Denso’s conventional ones, by using sophisticated forming technologies, thus reducing the depth and weight of the unit.

The conventional unit required several servo motors to operate the air mix door, whereas the new unit has standardized doors and needs only one, enabling the unit case to be made smaller. For the new blower fan, the wing blades of the fan are re-shaped to best suite the wind flow, which allowed the new fan to become 15 percent smaller and consume 20 percent less power, yet maintaining high air discharge capacity. With these new technologies, the new smaller, lighter climate control unit with higher performance can also be used in eco-friendly cars. Also by changing the blower fan to two layer structure, to take in external air and circulate internal air simultaneously, the air conditioning system could be used for vehicles with limited heat sources.