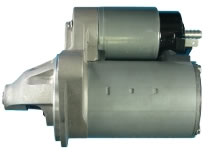 Denso has developed one of the world’s lightest starters for small, compact vehicles. The new Denso starter, which is about 40 percent lighter than a conventional starter, finds its first application in the MR Wagon launched by Suzuki in Japan earlier this month. For the new starter, Denso developed a pinion shift mechanism that separates the clutch and pinion so only the pinion needs to engage with the engine ring gear, whereas in conventional starters the integrated clutch and pinion needed to be shifted toward the ring gear to engage. With this new mechanism, the switch part was made lighter and smaller because less power was needed to move the engaging part. As a result, the overall product weight is approximately 40 percent lighter compared to the conventional product.

The new starter can be used for compact cars powered by gasoline engines of 660 to 1,200 cc displacement. In addition to this product, Denso has developed a starter, which is about 30 percent lighter than existing ones, for vehicle engines of 1,200 to 2,500 cc. DENSO aims to produce a total of 5 million units of both models a year, and sell them in China, Thailand, Brazil, India, and other compact gasoline vehicle markets. Denso’s starter allows for easier installation in the engine compartment and the reduction in weight also helps increase fuel efficiency.