Denso has developed a new starter, Tandem Solenoid (TS) starter, which saves up to 1.5 seconds off the restart time when restarting the engine, compared to Denso’s previous models. Denso’s new starter, designed specifically for stop/start systems, uses the world’s first mechanism to separately control the forward shift of the pinion gear and the motor rotation, which allows for a quicker restart. To start the engine, starters shift the pinion gear forward to mesh with the engine ring gear to transmit the rotational force of the starter motor through the pinion gear. The conventional stop/start system starter, which has a mechanism that conjunctionally shifts the pinion gear and energizes the motor for rotation, is not capable of restarting when the engine is rotating – or while the engine is coasting after the vehicle is stopped. Because of this lag time, it is possible the driver may wait up to 1.5 seconds when restarting the engine after the engine is stopped. 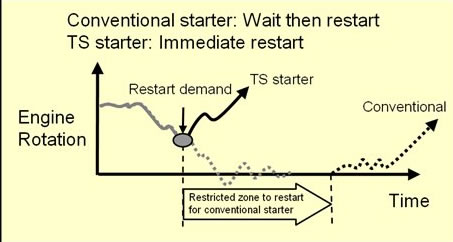