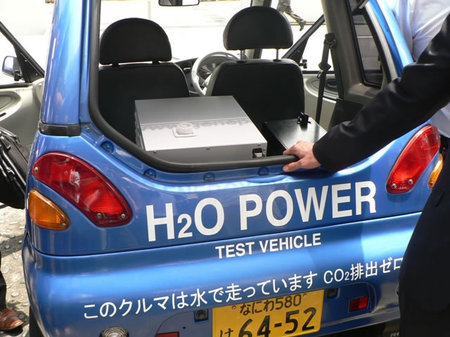 Future Cars to run on water only!

The new fuel cell system- Water Energy System (WES) developed by Genepax, Japan uses water as a fuel and does not emit CO2. The system can generate power just by supplying water and air to the fuel and air electrodes, respectively. The basic power generation mechanism of the new system is similar to that of a standard fuel cell, which uses hydrogen as a fuel. The main feature of the new system is that it uses the company’s membrane electrode assembly (MEA), which contains a material capable of breaking down water into hydrogen and oxygen through a chemical reaction.

Genepax unveiled a fuel cell stack with a rated output of 120W and a fuel cell system with a rated output of 300W. The 300W system is an active system, which supplies water and air with a pump. In the demonstration, the company powered the TV and the lighting equipment with a lead-acid battery charged by using the system. In addition, the 300W system was mounted in the luggage room of a compact electric vehicle “Reva” manufactured by Takeoka Mini Car Products Co Ltd, and the vehicle was actually driven by the system.

In future Genepax intends to provide 1kw-class generation systems for use in electric vehicles and for residential applications. The production cost is presently about ¥2,000,000 (US$18,522), it can be reduced to ¥500,000 ($5000) or lower if the company succeeds in mass production. Genepax believes that its fuel cell system can compete with residential solar cell systems if the cost is reduced to this level.