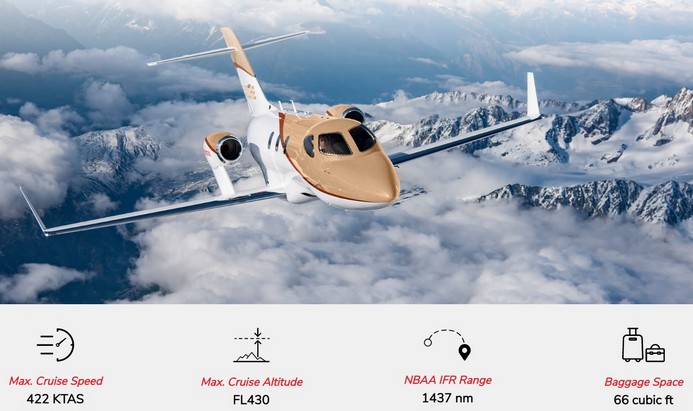 The HondaJet Elite S features several upgrades that expand operational capability and improve flight operation. With an increased maximum take off weight of 200 lbs., customers can now fly up to 120 nm (138 mi) further at a higher payload, or take an additional passenger  during their typical mission. The avionics simplifies the most difficult portions of the flight by providing on-board computation of the required runway length, and optimal climb and approach gradients.

The new avionics features of FAA Data Comm and ACARS replace traditional voice commands with text-based messaging to improve the clarity and efficiency of communications. The HondaJet Elite S flight deck uses a highly-customized, original design based on the Garmin G3000. The avionics interfaces naturally helps the pilot to reduce workload, while the seat design and panel layout were developed from an ergonomic perspective by accounting for pilot and passenger movements from every possible aspect.

The HondaJet Elite S builds upon the breakthrough aviation technologies introduced in the original HondaJet to deliver an aircraft that outperforms all others in its class. Honda Aircraft’s patented Over-The-Wing Engine Mount (OTWEM) configuration works with the airflow over the wing to minimize aerodynamic shockwave, increasing the aircraft’s top speed. This breakthrough also unlocks a larger, quieter cabin for passengers and a signature exterior profile that stands out on the ramp.

Natural Laminar Flow technology on the main wing and fuselage ensures a smooth and undisturbed airflow over the surface of the aircraft to minimize air resistance. This improves fuel efficiency, range, and speed. The HondaJet Elite S carbon composite fuselage is both stronger and lighter than the aluminum used by other aircraft in its class, letting it fly higher and faster while using less fuel.

Taking the HondaJet’s signature exterior profile to the next level, the HondaJet Elite S introduces new styling with exclusive paint schemes available in Gunmetal, Luxe Gold, and Deep Sea Blue. These new color options are topped off with a signature Elite S logo, with the bold red S and further customization available depending on exterior color selections.

Honda Aircraft’s innovations give the HondaJet Elite S the largest cabin in class, with a fully private lavatory and smartphone-controlled cabin environment. The HondaJet Elite S gives you more in comfort, so you can get the most out of flight time.The HondaJet Elite S has inherited the aeronautical breakthroughs developed by Honda Aircraft Company, including the Over-The-Wing Engine Mount (OTWEM) configuration, Natural Laminar Flow (NLF) fuselage nose and wing, composite fuselage and a highly customized avionics suite. The aircraft continues to be the most efficient, quietest, fastest, highest, and farthest-flying in its class.