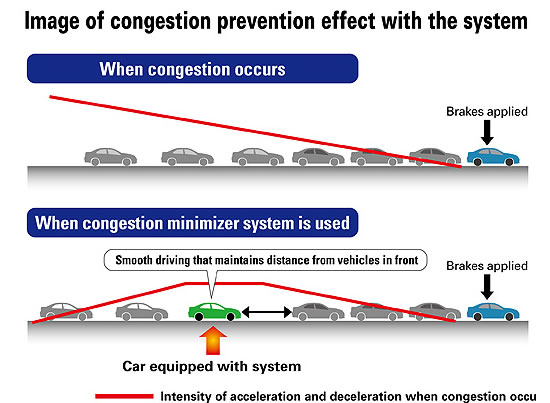 Honda announced the successful development of the world’s first technology to detect the potential for traffic congestion and determine whether the driving pattern of the vehicle is likely to create traffic jams. Rather than providing information to help the driver avoid existing congestion based on current traffic information, the system monitors the acceleration and deceleration patterns of the vehicle to determine whether the driver’s driving pattern is likely to create traffic congestion. Based on this determination, the system provides the driver with appropriate information, including a color-coded display through the on-board terminal, to encourage smooth driving which will help alleviate the intensity of acceleration and deceleration by trailing vehicles, thereby helping to prevent or minimize the occurrence of vehicle congestion.

In conjunction with the Research Center for Advanced Science and Technology at the University of Tokyo, Honda conducted experimental testing of a system utilizing the technology to detect the potential for traffic congestion. The test results demonstrated that the system helped increase the average speed by approximately 23% and improved fuel efficiency by approximately 8% of trailing vehicles. With the goal to bring this technology to market, Honda will begin the first public-road testing of the technology in Italy and Indonesia in May and July of this year, respectively, to verify the effectiveness of the technology in minimizing vehicle congestion.