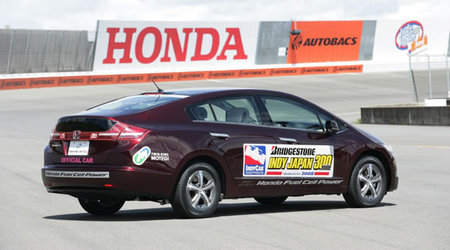 Honda announced that the FCX Clarity fuel cell powered by the highly compact, efficient and powerful Honda V Flow fuel cell stack will serve as the official car of the 2008 Indy Japan event (2008 IRL IndyCar Series 3rd race: Bridgestone Indy Japan 300 Mile) to be held at Twin Ring Motegi in Tochigi, Japan, April 17-19. Scheduled for release in the U.S. in the summer and in Japan in the autumn of this year, the Honda FCX Clarity runs on hydrogen and emits no CO2 or other environmentally harmful emissions in operation, making it an ideal vehicle for the event. The fuel cell vehicle emits only water and is regarded as the ultimate environmentally responsible vehicle.

Since 2007, all IRL IndyCar series racers run on low environmental impact 100% ethanol fuel.
Among other duties, the Honda FCX Clarity official car will act as a pace car at the start, leading the 18 race cars participating in the Indy Japan event, and will be on display inside the Twin Ring Motegi paddock.