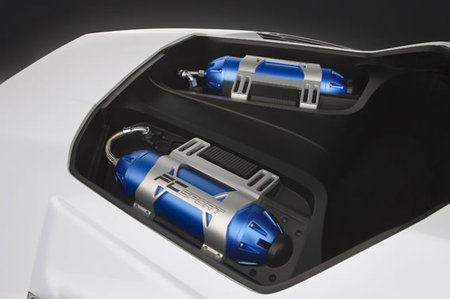 The ideal placement of the Honda V-Flow fuel cell stack and related components demonstrates the benefits of a platform-specific, hydrogen-powered fuel cell powertrain. The FC Sport is configured to accommodate a custom-formed high-power fuel cell stack, located between the rear seats, and a battery pack placed low in the middle of the vehicle. The electric motor resides just forward of the rear axle. Two fuel storage tanks, visible from above, are located above the rear axle.