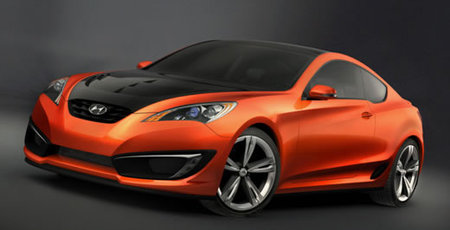 Hyundai Motor unveiled its Concept Genesis Coupe at the LA International Auto Show at the Los Angeles Convention Center on Wednesday. The rear-wheel drive Genesis Coupe is powered by a 3,800cc V6 engine linked to a six-speed manual transmission which provides over 300 horsepower and will launch the car to 100 km/h in six seconds.

The automaker added the “powerful curves and sensual body sidelines” come from “the same underlying inspiration” that guided two concepts: the HCD9 Talus and the HCD8 sports tourer. Hyundai plans to introduce a mass produced version of Genesis Coupe in Korea in the second half of 2008 and release the car in the North American market in the first half of 2009.