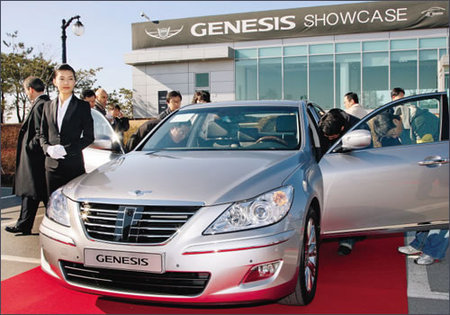 Korea’s largest automaker Hyundai Motor on Wednesday showcased its much-anticipated luxury sedan Genesis at its research and development center in Hwaseong, Gyeonggi Province. The event provided an opportunity to test drive the new car along with two other world-class premium sedans, the Mercedes-Benz E-Class 350 and the BMW 530i, for comparison. Genesis is not only Hyundai’s first luxury car built to target the global market but also its first rear-wheel-drive car. Hyundai has high expectations for the car, the name Genesis, meaning “new beginning” or “origin.”

The sedan also boasts a new emblem in the shape of flying wings instead of Hyundai’s usual “H” logo. The new car will officially hit the market on Jan. 8. The company aims to sell 80,000 cars home and abroad. The price has not yet been decided, but will likely be set at around W40-50 million (US$1=W923).