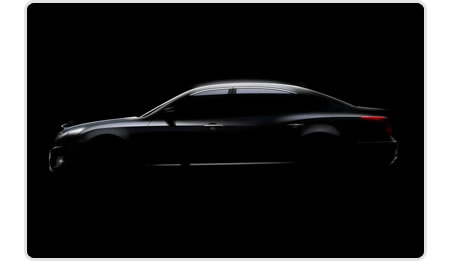 Hyundai luxury sedan codenamed VI to be launched in Feb. 2009

Hyundai will launch its much–anticipated luxury car codenamed VI in Feb. 2009. Promising to provide the pinnacle of luxury and to showcase Hyundai´s most advanced technologies, the VI will include among its sophisticated safety features a second–generation Vehicle Stability Management System (VSM2), a Lane Departure Warning System (LDWS) which employs a vision sensor to monitor traffic lane markers and a Pre–Safety Seatbelt System which on detecting an imminent front–end collision, will automatically reel–in the safety belts to maximize the safety of the occupants. Hyundai VI adopts a rear–wheel drive architecture which will make it a more credible competitor against the Lexus LS460, BMW 7–Series and Mercedes–Benz S–Class––all rwd models.

Hyundai VI will measure 5,160mm in length, 1,900mm in width and 1,495mm in height. VI will come with a 3.8–liter Lambda V–6 engine while the 4.6–liter Tau V–8 will be offered as an option. The VI arrives in Korean showrooms in Feb. 2009, while a top–of–the–range limousine edition will bow in the second half of 2009 .There are currently no plans to export VI to the North American or European markets.