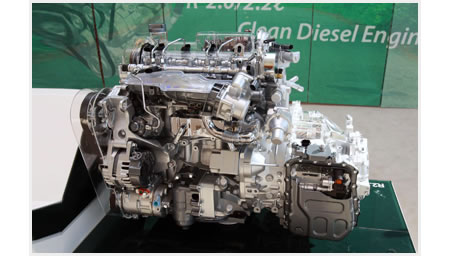 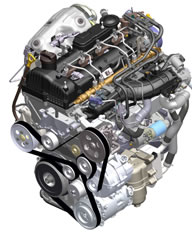 Hyundai today unveiled details of its newest passenger diesel powerplant, the R–Engine. With an output of 184ps and 40kg of torque, the R–Engine is ahead of the rest of the class, surpassing all German and French competitors (200ps and 44.5kg–m for the 2.2–liter). Available in 2– and 2.2–liter displacements, the R–Engine is fitted with a 16–valve dual overhead camshaft which is driven by an internal steel silent timing chain. Over 500 prototype engines were built during the 42 month–long development period which encompassed a wide variety performance and emissions tests, endurance as well as NVH, cooling and lubrication studies.

The Hyundai R–Engine benefits from the third generation common rail system developed by Bosch whose piezo–electric injectors deliver fuel at 1800–bar for an unprecedented degree of accuracy and control.
It also features an electronic variable geometry turbocharger and an advanced engine control unit (air system–based charge control). The R–Engine will enter production next year and will see its first application on the 2010 Tuscon and Sonata models which are due to be launched in the coming year. The Hyundai R-Engine is developed by a 150–man team at an investment cost of 250 billion won.