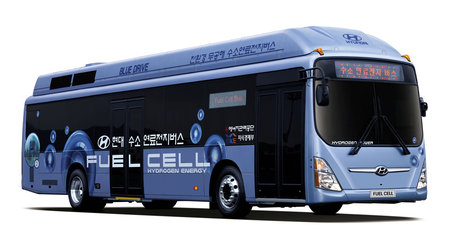 Three years after introducing its first fuel cell bus to the world, Hyundai Motor Co. recently unveiled its second generation hydrogen fuel cell bus at the Seoul Motor Show. Based on the latest Low Floor Aero City bus platform, the newest fuel cell electric bus features numerous technical refinements which have increased the maximum speed to 100km/h. Under the new architecture, three 100kW Permanent Magnet Synchronous Motors are arranged in parallel to provide a total of 300kW of propulsion for a 33 percent improvement in top speed. Compressed hydrogen fuel is stored on the roof in six cylinders pressurized to 350 bar (5000 psi) providing the bus with an operating range of 360km (city mode).

The heart of the system is a 200kW fuel cell power plant which was upgraded from its previous version of 160kW system in 2007 by Hyundai engineers. The next major step forward will come in late 2010 when a fleet of these second generation buses will be put into daily service in cities around Korea in line with the governments recently declared “green growth” goals.