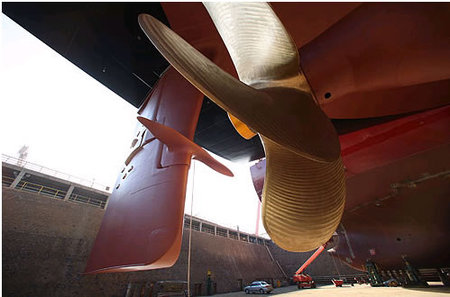 Hyundai Heavy Industries has developed another world first in vessel technology – Thrust Fin. Based on the same principle that allows airplanes to fly, the wing-shaped Thrust Fin is attached to the rudder of a ship to boost thrust and save fuel. HHI first put the fins on a 8,600-TEU container ship delivered to German shipping company Hapag-Lloyd in April. Hapag tried the fins and confirmed their effectiveness, and has asked to have them put on six more ships. Requests from other firms are also coming in. Hyundai says the fins reduce fuel consumption by 4 to 6 percent. A large containership consumes approximately 300 tons of fuel per day. If it is equipped with a thrust fin, the annual saving in fuel expense could total $2.4 million. With an average ship life time of 25 years, this amounts to $60 million in savings per ship.

Hyundai began developing the technology in 2004 and registered a domestic patent in 2006. It has since applied for patents in 10 other countries including the U.S. and Germany.HHI plans to build a mass production system for the Thrust Fins, reducing the production period in order to make 30 Fins per year.