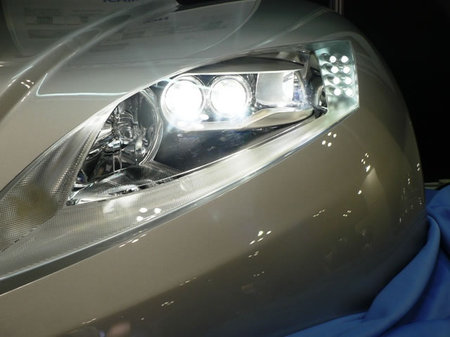 Ichikoh Industries, Japan showcased a white LED-based adaptive front lighting system (AFS) that can control the light angles of the right and left headlamps independently. The new Ichikoh headlamp is composed of two fixed units and one swivel unit. Each of the fixed units and the swivel unit is loaded with a white LED. The fixed units are projector type and the swivel unit is rotated by a stepper motor. The white LED loaded on each unit has four LED chips. The swivel unit lights up the area ahead of a vehicle by reflecting the light generated from the white LED twice. The headlamp has a total luminous flux of 12,000lm, which is equivalent to that of a HID lamp. The luminance efficiency of the LED is about 100lm/W.

The new headlamp allows adjustments of flux distribution, responding to driving conditions such as straight lane driving, curve driving and highway driving, as well as weather conditions. During heavy rain, the visibility of guardrails and side strips will be improved by directing the beams toward the shoulder.
The AFS was exhibited at AT International 2008, which took place from July 23 to 25, 2008, at Makuhari Messe in Chiba Prefecture, Japan.