Toyota, Nissan, Honda and Mitsubishi jointly established a new company, Nippon Charge Service, LLC, on May 26 to promote the installation of chargers for electric-powered vehicles (PHVs, PHEVs, and EVs). The goal is to help build a charging network that offers more convenience to drivers in Japan. Electric-powered vehicles are playing a major role in driving next-generation energy policy. On November 12, 2013, Toyota, Nissan, Honda and Mitsubishi jointly announced a plan to financially assist installers of charging stations and began taking applications from prospective charging station installers. Together with Government subsidies the grants will cover the entire cost of installation for successful applicants. 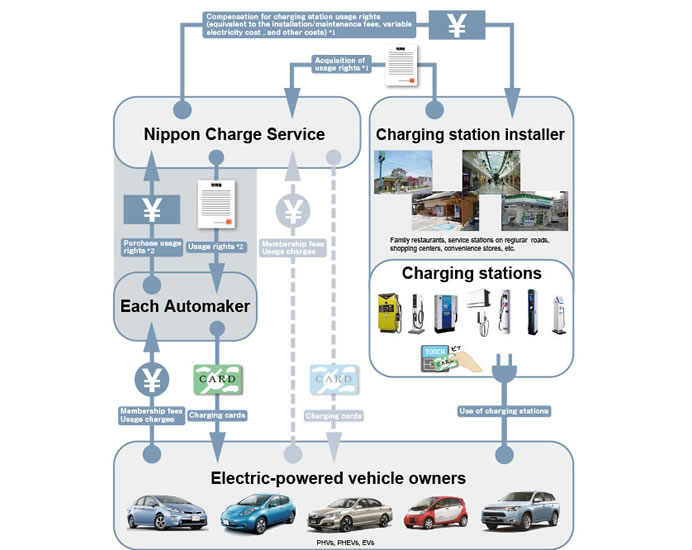 This program targets charging facilities recognized to have high public value under the next-generation vehicle charging infrastructure plans drawn up by local governments and authorities. Under the program, a number of commercial facilities, hotels, convenience stores and highways have started installing charging stations. Nippon Charge Service will manage the chargers and the installers of charging stations will be asked to participate in the charging infrastructure network operated by Nippon Charge Service. Through the new company the four automakers will also provide car owners with a universally-accepted charging card. The system will be up and running by the end of the year.