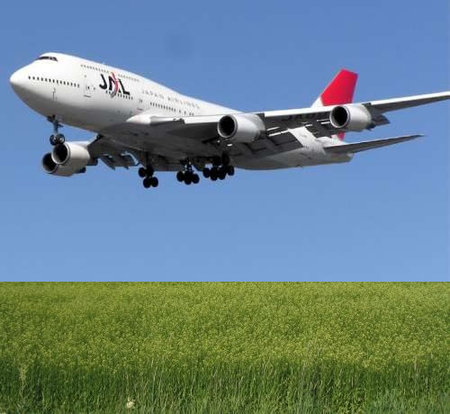 .
Japan Airlines will carry out a flight test on Jan. 30 of a Boeing 747-300 airliner fitted with a Pratt & Whitney engine using a 50 percent blend of a biofuel derived mainly from camelina, a plant in the mustard family. JAL will power one of the airliner’s four Pratt & Whitney engines with the biofuel blended at 50 percent with a conventional jet fuel based on kerosene. The biofuel also contains oil derived from algae and Jatropha, a plant. During the flight the engine will be cut in midair and then restarted for experimental purposes.

Camelina is inedible, so its application to jet fuel does not require sacrificing edible foods. Camelina is conventionally used to light lamps and as a material in cosmetics