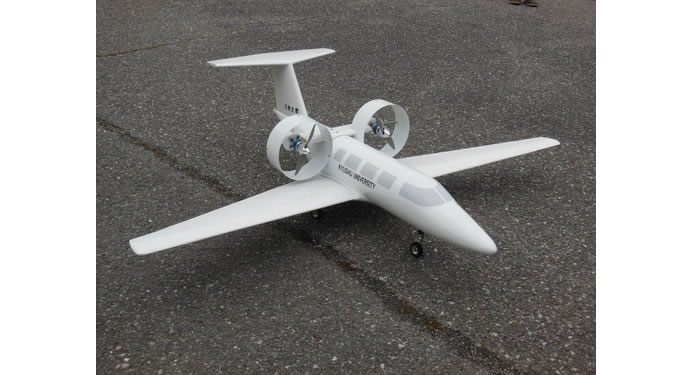 A group including Kyushu University, Yaskawa Electric and Ryokeiso is planning test flights of quiet and environmentally friendly electric airplanes — not the toy radio control type, but aircraft ready to carry people from point A to point B. The project group plans to remodel an existing small aircraft with the same electric motors, power control units and lithium ion batteries now found in electric cars, and then do ground tests at Oita Keno Airport in Oita Prefecture. During those tests, the engineers will check the RPM of the electric motor, current and the condition of the batteries, and use the data to evaluate the overall performance of the system including acceleration and propulsion.
The Kyushu project engineers envision an aircraft carrying four to six passengers, and have done initial wind tunnel testing with a one-tenth scale radio control airplane to confirm their design ideas. Yaskawa has loaned the project electric motors and power control units, while Ryokeiso contributed its power supply controllers that will link the batteries to the motors. Kyushu University will provide the small airplane, and do the data collection and analysis.