South Korea will make its third and last attempt to launch a homegrown space rocket between Oct. 26 and 31 depending on the weather. The launch comes two years and four months after the second one failed on June 10, 2010. The Naro Space Center in Goheung, South Jeolla Province placed the second-stage booster manufactured by the Korea Aerospace Research Institute on top of a Russian-made first-stage rocket booster on Oct. 3. An electrical conductivity test and a rehearsal will take place until Friday. 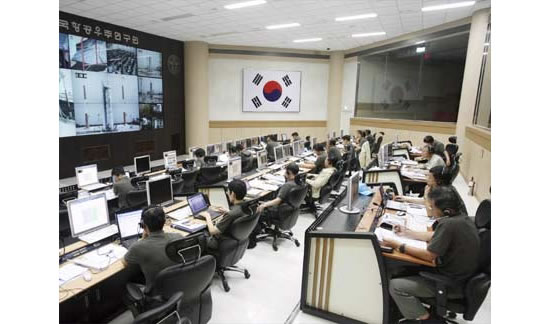 The rocket will be taken to the launch pad on Oct. 24. The space center will conduct a final rehearsal the following day and make a final decision at 11 p.m. the same day when and whether to launch the rocket. On the day of launch, fuel will be put into the rocket four hours before the launch and the computer-aided automatic countdown sequence will start 15 minutes before lift-off.

The rocket, dubbed Naro, will travel on a trajectory in five stages for a total of 540 seconds from launch to orbit entry. In addition to technical improvements, the rocket will be launched earlier than before. The first launch took place at 5:00 p.m. and the second at 5:01 p.m., both in the summer, but this one is scheduled for 3:30 p.m. because the sun sets earlier in the fall. That is the time when solar energy can be used most effectively. There will be no further attempt if this launch also fails, and the Naro project will come to an end.