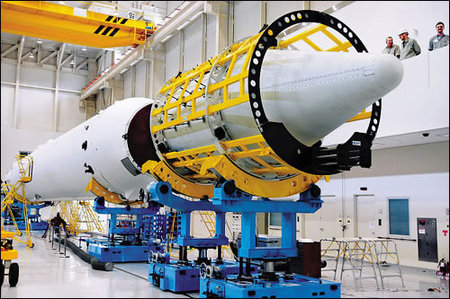 Korea’s first Space Launch Vehicle- KSLV-1 that will carry a satellite into orbit has been unveiled at the Naro Space Center in Goheung, South Jeolla Province. Space launch vehicle KSLV-1 consists of the upper part, which will be loaded with Science and Technology Satellite, and the lower part carry KSLV-1 from ground into space after launch. The 7.7m-high upper part was completed recently by the Korea Aerospace Research Institute with its own technology. The 25.8 m-high lower parts will be made in Russia and imported around January next year. The KSLV-1 is identical with the vehicle that will be launched into space next year in terms of design and performance.

The KSLV-1 was to be launched at the end of this year, but the launch has been postponed due to delays in technical cooperation with Russia and in the supply of rocket components. Now KSLV-1 will be launched during the second quarter, between April and June, next year.