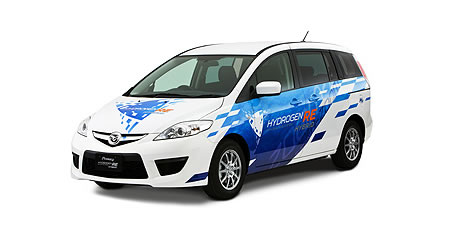 Mazda commenced commercial leasing of the Mazda Premacy Hydrogen RE Hybrid, a hydrogen hybrid vehicle that offers substantially improved performance thanks to the addition of a hybrid system. Mazda is the world’s first automobile manufacturer to begin commercial leasing of a hydrogen hybrid vehicle; the first units will be delivered to local government authorities and energy-related companies during 2009.
The Mazda Premacy Hydrogen RE Hybrid features a series-type hybrid drivetrain, which combines Mazda’s hydrogen rotary engine with an electric motor. The engine output is converted to electricity, which then powers the motor that drives the wheels. This hybrid system boosts the hydrogen fuel range of the Premacy Hydrogen RE Hybrid to 200 kilometers, twice the range of the RX-8 Hydrogen RE, and increases the maximum output by approximately 40 percent, to 110 kilowatts.

Mazda’s latest eco-car features many other forward-looking environmental technologies, including Mazda’s proprietary dual-fuel system, which enables the car to run on gasoline if hydrogen is unavailable, and interior parts made from Mazda’s plant-derived Biotech materials..