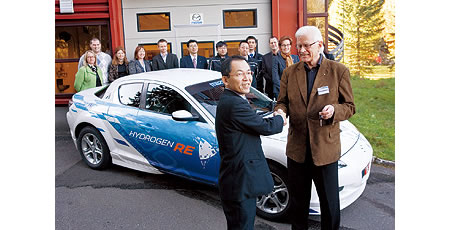 Mazda today introduced the Mazda RX-8 Hydrogen RE (Rotary Engine) vehicle to Norway’s public roads in collaboration with the Norwegian national hydrogen project, HyNor. Initially, the Mazda RX-8 Hydrogen RE’s driving performance on Norwegian roads will be validated with a single vehicle, which will also be shown at various events. This marks the first time that a Mazda hydrogen rotary vehicle has been put into regular use on public roads outside Japan.

HyNor is a national project in the Kingdom of Norway that aims to establish a clean energy transport system based on hydrogen fuel. Beginning in fiscal year 2009, Mazda will provide approximately 30 RX-8 Hydrogen RE vehicles for the HyNor project under commercial lease contracts.