Mazda has announced the Mazda RX-8 SPIRIT R, a special edition version of its four-door, four-seat rotary engine sports car. The RX-8 SPIRIT R will go on sale from November 24, 2011 at all Mazda and Mazda Anfini dealerships throughout Japan. Mazda RX-8 production will end in June 2012 and SPIRIT R will be the final special edition model. Mazda expects to sell 1,000 units. The Mazda RX-8 SPIRIT R is based on the RX-8 Type RS (with six-speed manual transmission) and Type E (with six-speed electronically-controlled automatic transmission). It is named after the final limited edition Mazda RX-7, and this pedigree is reflected in stylish features that include exclusive seat design and colored alloy wheels. Additionally, Mazda’s curtain and front side SRS airbag system, which is available as a factory-installed option on the base models, will be offered as standard equipment. Following the launch, the Mazda RX-8 lineup will consist of the SPIRIT R and the Type G (with six-speed electronically-controlled automatic transmission) model grades only. 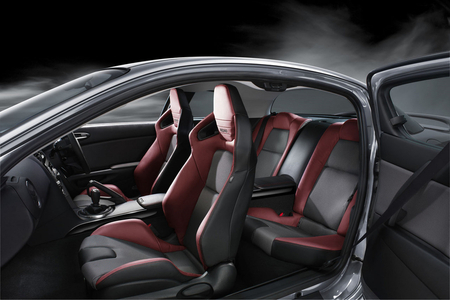 Takashi Yamanouchi, Mazda’s Representative Director, Chairman of the Board, President and CEO, said, Mazda’s iconic rotary engine recorded its famous victory in the Le Mans 24-Hour endurance race 20 years ago. Throughout 2011, we have been celebrating the 20th anniversary of that victory by demonstrating the winning 787B racecar at Le Mans’ Circuit de La Sarthe and various other events around the world. At each one, the screaming rotary engine and the sight of the 787B have enthralled everyone from young children to race fans who witnessed its victory in 1991.

These events have been a powerful reminder of the widespread passion for the rotary engine. Although RX-8 production is ending, the rotary engine will always represent the spirit of Mazda and Mazda remains committed to its ongoing development.