Mitsubishi Motors announced today that the new Outlander PHEV will go on sale at dealerships throughout Japan from January 24, 2013. Powered by the Plug-in Hybrid EV System powertrain derived from MMC’s lineup of electric vehicles (EVs). The world’s first plug-in hybrid SUV, the Outlander PHEV represents a fusion of the EV technologies developed by MMC for models such as the i-MiEV, 4WD technologies honed in the Lancer Evolution, and SUV know-how gained from the Pajero (Montero or Shogun in some countries). 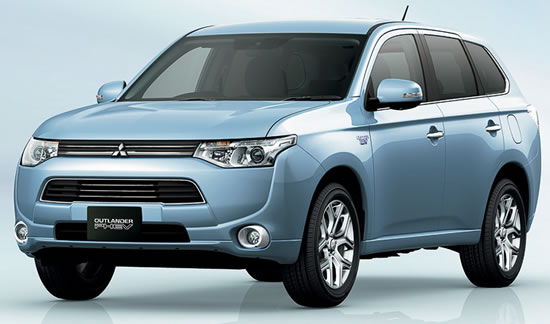 The result is a groundbreaking new model that brings together the superior environmental performance and quietness of an EV, the stability and handling of a 4WD, and the practicality of an SUV. The Outlander PHEV’s unique combination of electric motors and gasoline engine give it amazing flexibility in optimizing fuel efficiency and environmental performance while providing a long cruising range. For example, on electric power only, the Outlander PHEV has a cruising range of 60.2 km (measured via Japan’s JC08 mode), enabling it to function entirely as an EV in most everyday situations. It also has a total cruising range on a par with internal combustion engine (ICE) vehicles (897 km at JC08 mode), making it perfectly suited for uses traditionally associated with SUVs, such as long-distance travel and outdoor and leisure activities

The Plug-in Hybrid EV System of Outlander PHEV was developed based on the EV technologies used in the i-MiEV and MINICAB-MiEV for use in mid-size and larger passenger cars that require longer cruising ranges. Key components such as the battery and motor are constantly monitored, and integrated control is maintained over the engine, Twin Motor 4WD, regenerative brakes, air conditioning, and so on to ensure safe, comfortable, and fuel efficient driving.
The Outlander PHEV will be available in five trim levels: the base G, the G Safety Package fitted with MMC’s “e-Assist” (Japan-market name) advanced safety technology system, the G Navi Package, which comes with on-board navigation and other features, the G Premium Package, which features a RockfordFosgate Premium Sound System and leather-upholstered seats for extra comfort. 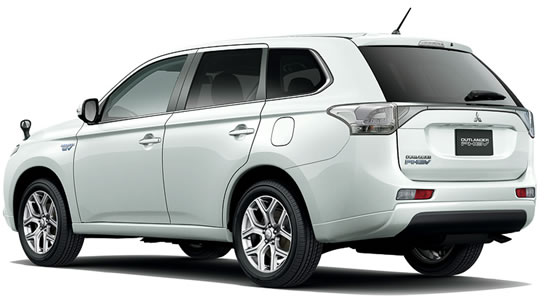