Southern California’s network of hydrogen refueling stations continues to grow in Southern California with the opening today of the world’s first station supplied by an existing hydrogen pipeline. The new Shell hydrogen station, which is conveniently, located in Torrance, California, next to several major freeway corridors and near the Los Angeles International Airport, taps into an existing industrial hydrogen pipeline serving a nearby refinery. The station is also outfitted with multiple fuel dispensers, which allow for the simultaneous refueling of four vehicles in less than five minutes. With this new station operational, Honda FCX Clarity customers will have access to seven hydrogen refueling stations across Southern California. The Honda FCX Clarity is available on a limited retail basis in Southern California with more than two dozen currently on the road and in the hands of individual customers. 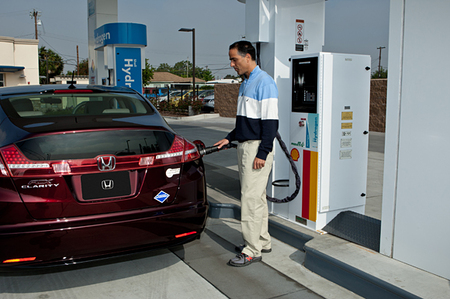 Propelled by an electric motor that runs on electricity generated in an on-board fuel cell, the Honda FCX Clarity delivers quiet, clean power with a small amount of water as its only emissions. The Honda FCX Clarity’s fuel efficiency is three times that of a comparably sized modern gasoline-powered automobile, and two times that of a gasoline-powered hybrid vehicle. With a 240-mile EPA-certified driving range and 5 minute refueling time, the zero-emissions Honda FCX Clarity provides customers with a very convenient and anxiety-free driving experience.