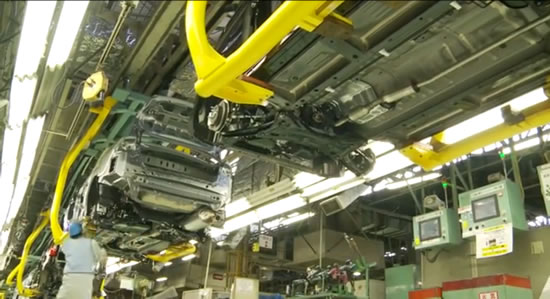 Nissan, Mitsubishi Motors and NMKV commemorates the off-line ceremony for the new minicar

Nissan, Mitsubishi Motors and NMKV today commemorated the off-line ceremony for the new minicar, which Nissan and Mitsubishi Motors will release in June across Japan, at Mitsubishi Motors’ Mizushima Plant. The new mini-car to be launched under the model names of Nissan DAYZ and DAYZ Highway STAR, and the Mitsubishi eK Wagon and eK Custom, is the first model jointly planned and developed by a joint venture, NMKV, engaging in the minicar business for both companies.

350 staff members from three companies pledged for further development in front of the car just rolled off the line after two years have passed since the foundation of NMKV in 2011.The new model was created with a totally different approach from the conventional OEM, where NMKV, a joint venture formed by Nissan and Mitsubishi Motors, combined strength of both companies in every step of car manufacturing.

Combining a product concept made up by NMKV consisting of members from both companies with a different taste of design of each company, the models carry the brand identity of each company. The new cars deliver a number of attractions that conventional minicars do not offer, including best-in-class fuel economy, touch-screen automatic air-conditioning system to be adopted for the first time in minicars and high-quality feel interior.