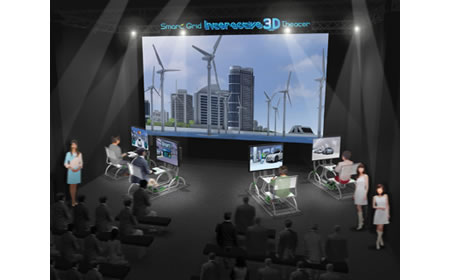 Nissan and Namco Bandai Games today announced the joint development of a driving simulator through which people can experience the near future of Yokohama City, in virtual reality, where a Smart Grid is in place. The simulator produces an ultra-high-definition 3D image with pixels approximately four times larger than the full high-definition image. Up to four people may use the simulator simultaneously. It can render road structure, buildings and facilities without any restrictions, so changes of the city landscape and functions caused by the introduction of the Smart Grid can be studied multilaterally and experientially. In addition, the Next-Generation ITS (Intelligent Transport System is an advanced information system that connects people, vehicles and traffic infrastructure that can contribute to improving road safety) that requires comprehensive evaluation with multiple vehicles can be tested in more realistic environments. 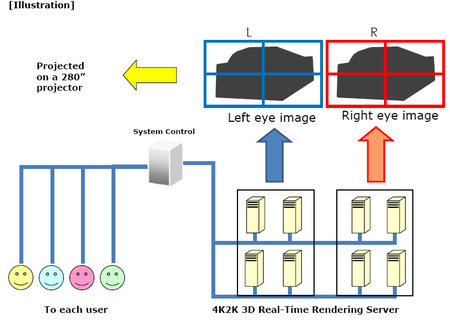 Nissan designed the base specification of the city and mobility, while Namco Bandai and its group company, CELLIUS, Inc., worked on system development. This is the world’s first system in which a number of vehicles can travel simultaneously and interactively in a diorama using the ultra high-definition 3D image. The driving simulator will be displayed as a special exhibit at CEATEC JAPAN 2010 October 5-9 at the Makuhari Messe in cooperation with other Smart Grid-related companies.