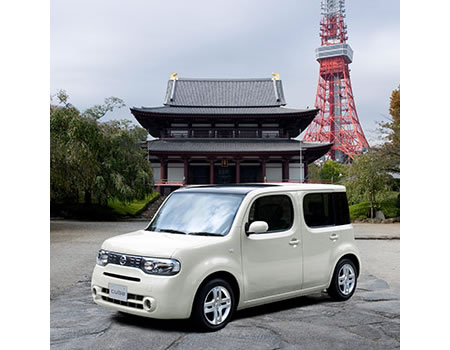 Nissan today revealed the all-new, third generation of its highly successful Nissan Cube in launch events in Japan, the United States and Europe. The fully redesigned Cube continues the iconic “cubic” styling of the previous generation, adding a higher level of refinement and polish inside and out. Originally launched in 1998, the Cube has sold nearly one million units to date in Japan. The latest version maintains the distinctive exterior styling that is instantly recognizable as the Cube, such as the asymmetric rear end, while pursuing a simpler, more universal design for its debut on the world stage. It offers greater comfort, a larger cabin and a host of innovative interior details such as sofa-like seating, a large glass roof panel that extends over the driver’s seat for an open, airy view of the outside environment, and a shoji-style roof shade that fills the cabin with gentle light.

Despite its increased roominess, the new Cube remains less than four meters long, providing big utility within a small physical footprint. With its excellent visibility and maneuverability, along with smooth performance and high fuel efficiency, the new Cube is a high-performance daily driver created to be enjoyed by value-conscious buyers worldwide. Sales of the new Cube begin in Japan on Nov. 26, followed by North American in the spring of 2009, and Europe and other global markets in fall 2009.