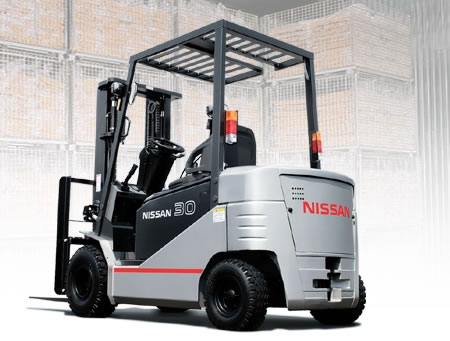 Nissan Forklift will debut its first Li-Ion powered forklift concept model at the CeMAT 2008 logistics exhibition, to be held at Hannover from May 27 -31.The electric-powered forklift employs advanced Li-Ion battery technology developed by Automotive Energy Supply Corporation, a joint-venture between Nissan Motor Co. and NEC Corporation and NEC TOKIN Corporation. This technology was presented at the Frankfurt Motor Show in the Nissan concept car “Mixim”. The technology is also featured in the PIVO 2 concept car. Nissan has committed to introduce a pure electric vehicle in the U.S. and Japan in 2010 and then to mass-market electric vehicles to consumers globally in 2012.

As the laminated Li-Ion technology is still in the research and development phase, an exact introduction date is not clear yet. Nissan Forklift expects to introduce this technology by 2009.