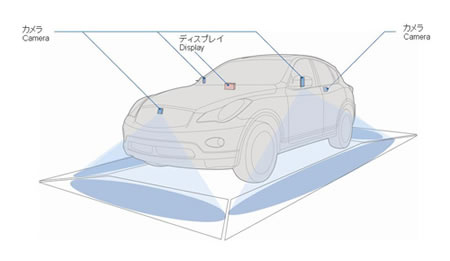 Nissan today announced its new Moving Object Detection (MOD) driving assistance technology, which is designed to detect moving objects around the vehicle and alert the driver to their presence. The conventional Around View Monitor system, with its user-friendly screen display, helps the driver steer the vehicle easily into a parking space. MOD uses both the screen display and an audio buzzer to notify the driver of moving objects in the vicinity of the vehicle – such as pedestrians -during parking procedures, when starting the car, or when driving at low speeds. This technology helps supplement the driver’s vision in situations such as when leaving a parking space or when entering into a junction/intersection with poor right-and-left side visibility.