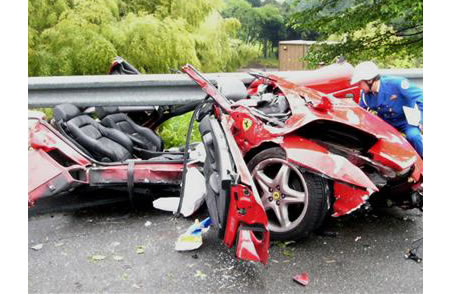 Oh God! It is a Red Ferrari!

This is what a red Ferrari looks like after it crashed into a guardrail on the Tomei expressway in Shizuoka, Japan on Sunday. Believe it or not the driver and a passenger both survived the crash, suffering only minor head injuries. The Tomei Expressway, the main artery linking Japan’s east and west, runs between Tokyo and Nagoya. Other expressways and major railways connect with Tomei so that the transportation network extends throughout Japan.