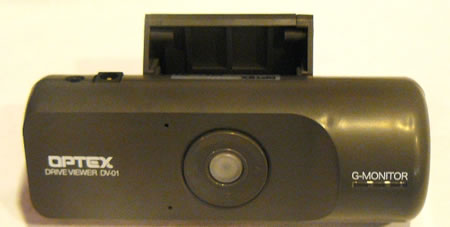 Optex Drive Viewer DV-01 is a driving recorder that can play back movies and sounds right after an accident by using a car navigation system. To play back a recorded movie on the spot, it is needed to connect the driving recorder with a car navigation system by using an RCA plug and to handle a controller composed of an arrow key and a center button. The camera module used in the Optex Drive Viewer DV-01 recorder is a 320,000-pixel CMOS camera which can shoot 10 frames per second. Its view angle is 114° in horizontal direction and 91.6° in vertical direction. The output of a triaxial acceleration sensor developed by Robert Bosch of Germany is used to judge whether an accident has occurred. Once the recorder judges that an accident has occurred, a video of eight seconds before and five seconds after the moment of the judgment is saved in a built-in 128-Mbyte flash memory. The memory can save up to five cases of accidents. 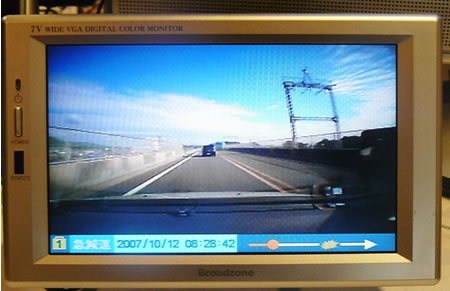 Furthermore, when the recorder judges “driving is wild” from an output of the sensor, it turns on a yellow LED. And when the recorder judges “driving is violent,” it turns on a red LED. Optex Drive Viewer DV-01 measures135 × 65.5 × 73.5mm, and weighs 180g. It takes 12 – 24V DC power sources from cigarette lighter ports. Because the recorder is compatible with 24V power sources, it can be mounted in heavy trucks. Optex Drive Viewer DV-01 will be available from 1st November for approximately ¥39,999 (US$ 346).