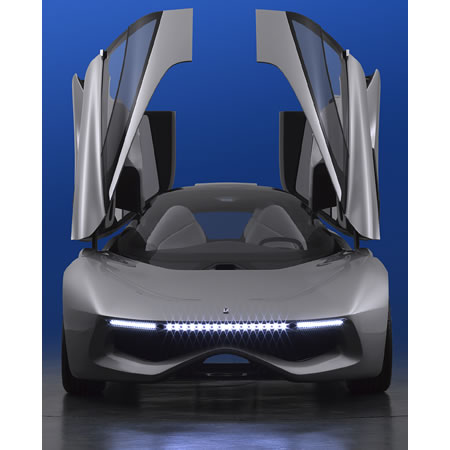 Pininfarina’s futuristic Sintesi concept car caused a sensation at the 2008 Geneva Motor Show, not least because of its spectacular headlight design featuring high-brightness LEDs from OSRAM Opto Semiconductors. Instead of two separate headlights there is a continuous narrow strip containing 16 OSRAM Ostar Power LEDs. Pininfarina has also chosen OSRAM LEDs for all the other lighting tasks in this vehicle – and not for the first time. These include daytime running lights, turn lights and taillight clusters and also the distinctive interior lighting with linearlight flex LED modules.

The Sintesi is an impressive example of how LEDs offer a degree of flexibility in vehicle design that has never before been seen. OSRAM high-power Ostar Headlamp LED technology platform opens up many options for automotive lighting design in addition to traditional headlights and LED strips. By the end of 2008 the company will have launched a number of different chip configurations in addition to the current 5-chip platform.