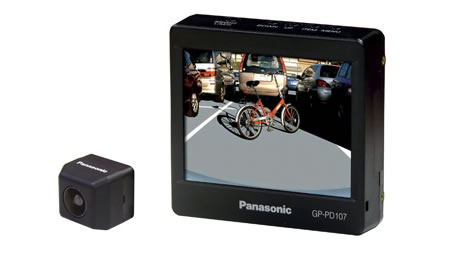 Panasonic will be the first in the industry to sell a rearview monitor system composed of a camera and a monitor. With this product, users do not have to purchase a car navigation system to introduce a rearview camera system. The new system is developed to reduce the cost by selling the camera and monitor as a set and is targeted at those who do not have a car navigation system. The 3.5 inch monitor with 320 × 240 effective pixels has two image input terminals, one for the camera and one for other electronic devices. When the shift lever is moved to a reverse position, the system can automatically show a rear view of the vehicle. The Panasonic monitor is accompanied by a stand with which the monitor can be attached on the instrument panel. Strong double-faced adhesive tapes are attached on the back of the stand.