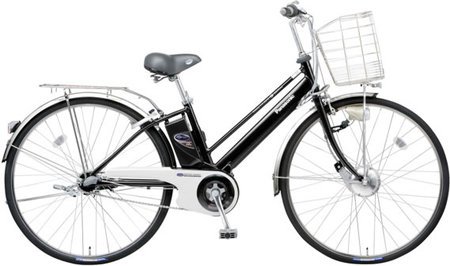 Panasonic will release the Lithium Vivi RX-10S, an electric bicycle capable of recharging a Li-ion secondary bat he system. The new Panasonic Lithium Vivi RX-10S electric bicycle also features “Automatic Mode,” which automatically tery using a regenerative braking system in Japan on Aug 20, 2008. By utilizing a regenerative braking system on downward slopes, etc, the assisted travel range is significantly extended compared with systems that don’t use regenerated energy. When riding on the course under conditions set by the company, which includes upslopes and downward slopes, the assisted travel range was reportedly extended to approximately 125km with the use of the regenerative braking system, whereas the assisted travel range is only about 90km without using t selects the assistance force in four levels- high, medium, low and off in accordance with the riding condition. The riding condition is estimated based on the value obtained by a torque sensor that measures the pedaling force accordingly.

The Li-ion secondary battery uses a Manganese -based positive electrode. The battery weighs about 2.5 kg and has a rated voltage of 26 V. The expected retail price of the bicycle is ¥150,000 (US$1,395) and the annual sales target is 3,000 units.