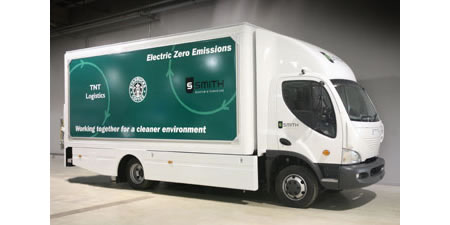 The world’s leading manufacturer of commercial electric vehicles is launching its unique zero emission truck in the North American market. The robust Smith Newton is the world’s largest high performance electric truck, weighing in with a Gross Vehicle Weight (GVW) of over 24,000lbs. A rack of suitcase-sized, 278 volt batteries and a 120 kilowatt motor quickly propel the vehicle up to its top speed of 50mph. In fact, Newton can accelerate from 0-30mph faster than the equivalent diesel-powered truck. Fully charged, the vehicle has a range of up to 150 miles, while the regenerative braking system returns power to the batteries every time the vehicle slows or stops. Smith Newton is designed for urban, intra-city operations, including home shopping delivery; 3PL logistics; post and parcel distribution; and municipal duties.

Smith Newton is the first vehicle in its class that can compete with the diesel equivalent – but without the polluting effects of tailpipe emissions such as nitrogen oxide; particulate matter and CO2. The vehicle has a payload capacity of up to 15,800lbs and is available in US truck Classes 5 through 7. Launched in early 2007 in Europe, the Smith Newton is already in fleets for household names such as Starbucks, DHL and TK Maxx, along with British institutions like the Royal Mail and retailer Marks & Spencer.